10 Reasons Why Beer Isn’t So Bad After All

If you drink it in moderation, beer is more of a friend than a foe. Of course, this is not to encourage you to drink more, especially if you really don’t drink at all or suffering from a medical problem. But if you’re a moderate drinker, then reading this would make you feel less guilty of indulging your fondness of beer.

Those that drink beer in moderation have longer life spans

To reiterate, moderate drinking is good and beer is one that’s ideal for moderation. As you already know, excessive drinking is not a pretty habit worth keeping. You get into troubles, you get serious medical issues and you destroy whatever relationships you have with other people. Nothing good comes out of it at the end of the day.

However, more studies in the present times signify that not drinking at all isn’t good for you, either. Studies suggest that moderate beer drinkers live longer than those who don’t drink at all and those who have excessive drinking problems. Essentially, beer is great for moderate drinking because its alcohol content is lower and its volume is greater.

Beer is low in carbs, calories, and contains zero fat or cholesterol

Being a totally natural drink, beer mostly has low calories. Guinness containing 12 oz only has 125 calories. That’s even less than an orange juice, which has about 150 calories. The only natural drinks that have lower calories than that of beer are plain tea, black coffee and water.

As for the carbs in it, it doesn’t have much. On average, it only has 12 grams of carbs in every 12 oz of serving and the US Recommended Daily Allowance for a regular 2,000-calorie diet is 300 grams of carbs. If you want to fill your body with carbohydrates, beer isn’t the best way to go, because of its low carbs content. Finally, it has no fat or cholesterol.

While you might have heard from others that beer is filled with preservatives and other artificial additives, it’s actually the opposite. In actuality, beer is as natural as a fresh orange juice. It does not require preservatives because it already has alcohol and hops, which are both natural preservatives.

As mentioned earlier, beer has no cholesterol and aside from that said absence, beer can actually improve the cholesterol in the body. In actuality, drinking beer on a regular basis will place your HDL/LDL ratios properly. HDL is the good cholesterol in the body that that serves as a fortress for your veins and keep things circulating while LDL is the bad cholesterol that accumulates in your veins, obstructing healthy flow. Beer helps to remove the build-up caused by LDL and helps increase HDL levels. According to some researches, even one beer per day can help increase your HDL by up to 4%.

Beer is good for relaxing

Many people associate drinking with having fun with friends Drinking beer helps you chill and the social aspects linked to it can be good for you. So you’re actually doing yourself a favor by going out there from time to time to be with your buddies over a couple of beers.

Beer is more harmless than water

If you’re traveler and you’re somewhere where drinking water is not advised, the local beer is the safer choice. It’s even a better selection than local bottled water. This is because beer is boiled during its brewing process and is ensured to be clean even throughout the capping and sealing process. It it’s not clean during the process it undergoes, it goes unpleasant that’s impossible to hide, which makes it impossible to sell. In the case that it goes bad, there are no highly detrimental pathogens that can flourish in beer. This means even the bad kind of beer is a better option than water.

Beer has lots of B vitamins

Beer is also loaded with nutrition, specifically the unfiltered or the slightly filtered kind. There’s an abundance of B vitamins in beer, particularly folic acid, which is considered to be helpful in preventing heart attacks. Plus, it has soluble fiber that helps in getting you a regular bowel movement. There’s also the fact that beer increases essential levels of magnesium and potassium.

Just like red wine, beer has high levels of antioxidants, which makes it useful health-wise. In a study published in the British Medical Journal, having three drinks each day could potentially decrease the likelihood of having coronary heart disease by 24.7%. 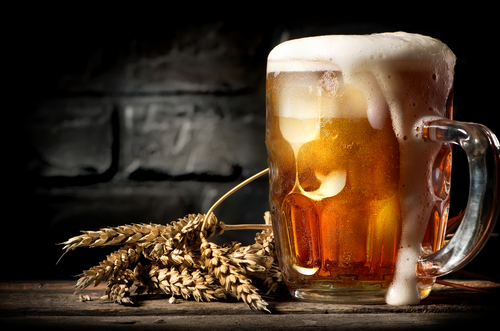 There’s this typical conception that those who drink beer cause what we call the beer belly or tend to weigh more. However, studies argue that there’s no direct link to this and the connection between beer and obesity lacks in undisputable proof. Many researches even found that moderate drinkers don’t only develop beer bellies; they also weigh less when compared to those who don’t drink at all.

In fact, beer helps increase your metabolism, keep your body from absorbing fat, and generally helps you become healthier – just as long as you drink in moderation and you observe a healthy diet.

The hops in beer have a flavonoid called xanthohumol. This is a potent antioxidant that slows down or restrains cancer-causing enzymes. Xanthohumol is so great for your health that beers in Germany are brewed with added levels of it.

Overall, there’s no guilt in drinking beer if it’s only in moderation. In fact, it’ll lengthen your life span by helping you prevent serious diseases like cancer and heart illnesses. It doesn’t make you fat, either. It actually does the opposite as it boosts your metabolism. So, you see? Beer is your friend. It only becomes bad when you drink more than you can hand

A Product Review of CogniMaxx XL