The human memory is an amazing storage system that remembers things from the most meaningful to the least insignificant. And just like any storage system, it needs fuel to power it up, maintenance to keep it working properly, and, sadly, sometimes it needs repairs, too.

Our brain is such a complex structure that up to now scientists are still trying to figure out exactly how the brain works. Especially with diseases like Alzheimer’s and Parkinson’s being in the center of healthcare attention, scientists and researchers are diligently studying how human cognitive functions, including memory, work.

There are so many factors affecting human memory, from physical causes like head injury to chemical and hormonal imbalance, and even personal interest – these all affect how well we remember things. What’s even more interesting is that the food we regularly eat also influences how well our brain is able to retrieve and make use of stored information.

Thanks to the growing popularity of nutritional psychiatry, there are more scientific studies and data available now to help us change our nutritional and eating habits so we can improve our brain’s health and enhance our memory and cognitive functioning. As a product of these studies, here are three yummy snacks that can boost our memory.

Blueberries have long been categorized as a superfood because it’s low in calories but high in so many nutritious constituents. Packed with antioxidants, vitamins, and minerals, it’s no wonder that blueberries have so many health benefits.

Moreover, blueberries contain anthocyanins which improve the neuron signaling communication process in the part of our brain that deals with memory. These anthocyanins also have a positive effect on glucose disposal. These properties help prevent or lessen the degeneration of our brain cells.

Because blueberries are so rich in antioxidants, it was established in animal studies that blueberries are good for protecting our brain from oxidative stress. Blueberries are also great for lessening the damaging effects of dementia or Alzheimer’s.

Although it’s expected that as we age, our bodily systems, including our brain, will deteriorate, the impact can be lessened by regularly consuming brain foods like blueberries. For instance, it was found that in aging rats, learning capacity and motor skills were better as a result of eating a blueberry-rich diet.

In another study, adults who were suffering from moderate cognitive impairment were given freeze-dried blueberry powder every day for four months. As a result, the patients showed improvements in memory, cognitive function, and brain activity.

Hazelnuts, almonds, and peanuts are all rich in Vitamin E, especially alpha-tocopherol. There are actually eight forms of naturally occurring Vitamin E, but alpha-tocopherol is the main type of Vitamin E that our bodies use. Vitamin E are compounds that are fat-soluble and are known for their antioxidant properties.

Vitamin E has long been recognized for its antioxidant and anti-inflammatory properties. In the past decade, studies on Vitamin E revealed many other benefits that were previously unrecognized. In recent years, Vitamin E has been the subject of studies focusing on cognitive performance, especially in relation to aging people and patients suffering from Alzheimer’s. The common premise is that since Vitamin E is such a potent antioxidant, it should also be able to protect the brain from age-related deterioration.

According to one study, Vitamin E is recommended as a nutritional compound for the promotion of healthy brain aging, and more specifically, to help delay the effects of cognitive decline related to Alzheimer’s disease. This is because Vitamin E is safe for consumption of elderly people, even up to 2,000 IU per day. Moreover, Vitamin E is not expensive at all, and can readily be obtained from common foods. 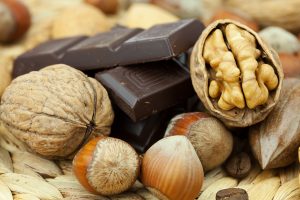 Another study also concluded that vitamin E may be helpful in preventing or delaying the progression of Alzheimer’s, not only because it helps lessen oxidative stress, but also because it can enhance memory and counter cognitive impairments. One study found that Vitamin E pretreatment lessened the effects and frequency of seizures related to temporal lobe epilepsy and promoted passive avoidance memory and learning in rats.

Humans are actually able to produce choline, however, the amount produced is usually not enough to meet the body’s requirements. For adult males, choline intake should be at least 550 mg per day. You can take supplements for choline, or you can take it from foods such as pan-fried beef liver, which gives you 356 mg of choline per 3-ounce serving.

Choline is extremely important in the body because it plays a major role in our metabolism. Moreover, choline is vital in the maintenance of cell membranes. One of the most important roles of choline is in the body’s production of acetylcholine, which is a neurotransmitter. Acetylcholine is one of the most important neurotransmitters as it plays a huge role in memory, arousal, mood, neuroplasticity, muscle control, and many other necessary brain and nervous system functions.

In observational studies, it was found that elderly people who have choline-rich diets showed better verbal and visual memory as compared to those whose choline intakes were lower. One study on the neuroprotective properties of choline concluded that choline consumption of adults is linked to increased memory performance as well as higher resistance to cognitive impairments.

5 Disturbing Facts You Should Know About Cirrhosis

Different Sex Positions to Switch Up Your Sex Life

HIGH-FAT MEALS VS HIGH PROTEIN MEALS; WHICH ONE...