Male infertility is a condition which prevents a man from being able to impregnate a woman. More specifically, it is defined as the inability of a man to get his partner pregnant, even when they have been trying to conceive for a year and have not been using contraceptives.

It’s been reported that fifteen percent of couples who are trying to conceive fail to do so after the first year. Male infertility is said to cause the problem 30% to 50% of the time. The condition has various causes, including physical problems such as with the testicles or the ducts through which sperm passes through. Hormonal problems and genetics can also cause male infertility.

The most common cause of male infertility, however, is related to the man’s sperm production and the quality of the sperm produced. If sperm production is low, it lowers the chances of a sperm being able to reach the female egg to fertilize it. Sperm count is measured per milliliter, wherein 10-15 million sperm per milliliter is considered low. It can also be measured per ejaculate, wherein a man is supposed to produce at least 39 million sperm per ejaculate. Lower than that means your sperm count is below normal.

The good news is that male infertility, in most cases, is treatable. Fertility clinics have set procedures for diagnosing the problem, and treatments are customized, depending on the couple’s medical conditions and what caused the infertility in the first place. Aside from going to a fertility clinic, there are also natural ways to boost spermatogenesis or sperm production which can help if low sperm count is the main cause of infertility.

Medicinal plants have long been used for the treatment of male infertility. Whether it’s in extract form or decoctions, fractions, and semi-purified forms, medicinal or herbal products are common in traditional medicine treatments for conditions like sexual dysfunction, low libido, and erection and sperm problems. 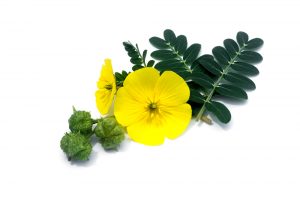 Tribulus terrestris, also known as puncturevine, is a common ingredient in male enhancement supplements and is promoted as a testosterone booster. The shrub is common in tropical and temperate regions such as in India where it is often called Gokshura and has been used in Ayurvedic medicine to treat many conditions including as an aphrodisiac and to treat impotence. In traditional Chinese medicine, the medicinal plant is also used to treat sexual dysfunction.

A 2012 study tried to validate the use of Tribulus terrestris in Ayurveda, specifically for the treatment of Kshina Shukra, the Ayurvedic term connoting male infertility. A total of 63 patients diagnosed with the condition were divided into two groups, with one group treated with placebo and the other treated with Tribulus terrestris. Both were administered in 6 grams granule form twice daily, for 2 months. The researchers concluded that treatment with Tribulus terrestris is good for the management of infertility, specifically by significantly improving sperm count.

The phytochemical protodioscin is attributed as the main active constituent in Tribulus terrestris that’s responsible for its aphrodisiac and testosterone-boosting properties. Other studies showed that Tribulus terrestris had proerectile effects by improving intracavernous pressure in the corpus cavernosa in the penis. This results in increased blood flow to the penis which facilitates erections.

Satureja khuzestanica is another plant that’s been scientifically proven to increase sperm count. This medicinal plant is mainly found in the southern part of Iran, in Central Asia, North Africa, and in the southern part of Europe. In treatments of fertility problems, as well as to relieve oxidative stress, of Satureja khuzestanica essential oil (SKEO) is used.

In one study, SKEO was administered to rats for 45 days. The results showed that this improved potency, fecundity, and fertility index in male rats. Specifically, it increased the production of young sperms as well as motile sperms, improved testes weight as well as the weights of the ventral prostate and seminal vesicles.

Because of its antioxidant properties, SKEO is also reported to protect the reproductive system from toxicity. It can also improve plasma testosterone as well as sperm production and sperm quality. The plant is reported to be beneficial for improving fertility, relieving toxic stress as well as DNA damage. This plant is good not just for treating male infertility, it was also found to help protect female eggs from oxidative stress. 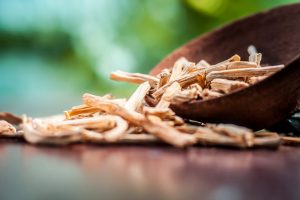 Asparagus racemosus is not the same as the vegetable we often find in soups but it is related. This plant is common in South Asian countries like India, Nepal, Sri Lanka and the Himalayas. Asparagus racemosus is another medicinal plant used in Ayurveda medicine for the treatment of various diseases.

In one study, it was shown that an aqueous extract of Asparagus racemosus, given orally at 100 mg per kilogram of body weight, was effective in improving penile erection and sperm count. Another study showed that this medicinal plant increased mounting behavior in rats and had almost the same effect as Sildenafil citrate. Aside from improving male sexual functioning and fertility, Asparagus racemosus is also used as a rejuvenating medicine for women because it helps with threatened miscarriages, menopause, and can also balance cervical pH levels.

Ashwagandha or Withania somnifera is another medicinal plant that’s commonly used in Ayurvedic medicine for the treatment of infertility and other male sexual dysfunctions. The plant is native to India, China, and Nepal. Other names for ashwagandha include Indian ginseng and winter cherry. Ashwagandha is another well-studied plant that is also common in many male enhancement supplements because of its touted benefits on male sexual functioning.

In fact, in a pilot study involving 46 male patients with low sperm count, a 167% increase in sperm count was noted after 90 days of treatment with Ashwagandha root extract. Moreover, it also increased sperm concentration and the volume of ejaculate as well as the serum levels of testosterone.

Different Sex Positions to Switch Up Your Sex Life

What is Financial Domination