It’s the image that defines a generation: young people bent over their phones, thumbs flying, hours per day. Social commentary pokes fun at this new custom, while scientific studies warn of overstimulation and its negative effects. But you don’t have to be a millennial to be overstimulated. In fact, studies show that generations more than one step ahead of millennials are often in the same situation.

Though doctors do not know exactly what causes anxiety, overstimulation (or sensory overload) is a contributor and correlates with anxiety and depression. If you are an HSP, a category of people who are more responsive to their environment and are believed to make up almost a fifth of the general population, pay attention. People with heightened sensory perception tend to process more details of the stimuli surrounding them, but for their own peace of mind, they should learn to notice where their threshold is because surpassing it leads to anxiety that is often avoidable.

It’s there in the kitchen, making it difficult to cook. It’s in the bathroom, sprawled out over the counter, and all over every surface in the main living spaces of many homes: clutter. Even when you’re not looking at it, you know it’s there, and part of you is thinking about it even when you’ve stopped seeing it. If this sounds like you and the place where you live, you likely aren’t doing yourself any favors by overlooking it.

For most people, clutter affects mental state. It becomes difficult to prioritize what you really need and what’s dragging you down if you’re constantly surrounded by… stuff. It’s overstimulating. There’s a reason why Zen temples are virtually empty: clear space 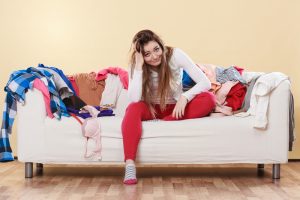 promotes a clear mind. Constantly encountering several objects that stare you in the face in your own home has an effect like keeping a TV on but muted 24/7.

Cleaning some of this up will reduce your daily dose of overstimulation. Whether this means reflecting on your buying habits, investing in a wildly successful book about the art of decluttering or just combing through the house with a series of bags you’ll take to Goodwill, you’ll be doing your mind a favor.

TV At All Times

You may end up watching TV programming that gives you stress, but you have become so used to it that you continue watching it. For example, some people watch the news past the point at which they feel uncomfortable. Someone indulging in news programs daily may be consuming so much negative news every day that it feels like everything is preparing to combust. But TV functions as an escape from reality, and many people continue watching through their stress instead of listening to their body’s plea to make it stop.

Some studies link habitually high consumption of TV (two or more hours per day) with depression. If you’re following the lives of various characters, in different shows and films alternating all the time, are you really experiencing your own?

One contributor expressed that sometimes when he spends time immersed in his phone, he needs to put Netflix on in the background to feel comfortable. This is like many students’ claim that they cannot do homework without music. More and more young children seem to have needs that differ from the needs of children fifty years ago, specifically regarding play. Previous generations of children needed to learn to play by themselves. This meant imagination-heavy quests through the woods behind the house, playing house, making up games to play with a pet, reading a book, or building things.

Exacerbated by a growing societal fear of allowing children to spend time alone, fewer and fewer children know how to play independently. One contributor expressed that his child does not feel comfortable playing alone with conventional toys, or pets, and needs to have constant company to enjoy herself. This, or she needs an iPad.

This may seem ridiculous in a discussion of children, but many American adults are putting themselves in this same situation. Do you wake up and go straight to the internet or TV, marinate in multiple channels of sound all day, listen to high beat-per-minute media or news during your commute, and then come home and surrender yourself to a video streaming service? It may be time to learn how to appreciate silence again, or else risk the effects of continual low-level anxiety.

Ironically, feeling bored a majority of the time might mean that too much is going on in your headspace. We often characterize boredom as an absence of options, when really, it’s linked to feelings of anxiety. 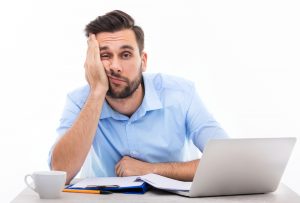 What is the difference between boredom and calm? Boredom is a higher state of energy, with more thoughts racing around the head and a desire for change, while calm is more a feeling of acceptance. Every opportunity for one is not an opportunity for the other. For example, is it highly possible to feel calm while TV blares six feet away, someone tries having a conversation with you, and meanwhile a car honks its horn impatiently outside? And as this happens, you receive three phone notifications at full volume? Do you feel calm? More likely is a feeling of anxious boredom, a desire for more engaging TV programming and a faster-paced conversation, as well as an itch to look at the phone.

Now imagine the TV is off. All nearby cell phones are set to silent so that notifications will receive their answer in due time but not immediately. You’re in a room further away from the road, where traffic sounds cannot follow. And now someone comes to you for conversation. How much is more welcome this conversation? Are you bored with it?

It becomes difficult when our attention is pulled in several directions all at once, to feel comfortable where and as we are. Sometimes all this stimulation leads us to want liberation, or to be somewhere else, a frustration often misinterpreted as boredom.

Rebuilding Your Relationship After Cheating

Quick Meals for the Dietarily Limited