Delayed ejaculation is one of the least studied sexual dysfunctions afflicting men. Nevertheless, studies have shown that delayed or retarded ejaculation can be caused by numerous factors such as psychological factors and medical conditions.

Certain surgeries are also known to cause retarded ejaculation or retrograde ejaculation as an adverse effect. Most of these are surgical procedures that involve organs in the pelvic area.

Take a look at these 5 surgical procedures and how they affect your ejaculatory function.

Testicular cancer accounts for only about just one percent of all cancers affecting men. Testicular cancer survivors often report weaker orgasms and ejaculatory disorders like delayed ejaculation and anorgasmia. On top of these sexual dysfunctions, testicular cancer and its treatments can also cause infertility.

During orchiectomy, one or both of your testicles are removed, sometimes along with the nearby lymph nodes if they have already been affected by cancer. When the nearby lymph nodes are also removed, it can affect the nerves that are responsible for ejaculation. If those nerves are damaged, you will experience ejaculatory problems.

If only one testicle has been removed, you may still be able to produce sperm and testosterone, although at a decreased production rate. Hence, you may experience a reduced sex drive due to low testosterone levels. You may also suffer from infertility due to low sperm production.

Radiation therapy can also affect your sperm count, so it would be a good idea to bank your sperm first before going through with the therapy. Chemotherapy is also likely to cause infertility. 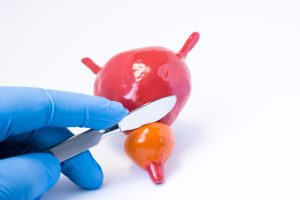 Surgeries for the treatment of lower urinary tract symptoms (LUTS) associated with an enlarged prostate often adversely affect ejaculatory function. If the surgery affects the bladder neck, it can result in retrograde ejaculation wherein the semen flows back to the bladder during ejaculation.

HOLEP is a relatively new form of treatment for benign prostatic hyperplasia which makes use of Holmium laser. Although it’s considered an alternative to transurethral resection of the prostate (TURP), HOLEP is also associated with a high prevalence of ejaculatory disorders.

This also means that how your orgasm feels will also change. Since there’s no seminal fluid anymore, you’ll no longer feel that sensation of fluid building up in your urethra or that feeling of fullness that tells you you’re about to burst. For most men, this is part of the pleasure of orgasms, and, unfortunately, you lose that after a radical prostatectomy.

Various sexual problems have been associated with pelvic surgeries such as mesorectal excision. This is because pelvic surgery often affects the nerves linked to the ejaculatory tract. A pelvic surgery is typically performed to treat lower rectal cancer.

Unfortunately, there’s a high prevalence of ejaculatory disorders in sexually active men who have had a pelvic surgery. Almost 70% of men experience anorgasmia after a pelvic surgery. Orgasm capacity and ejaculation ability after the procedure are reportedly much lower compared to the men’s preoperative state.

This type of surgical procedure is very delicate, especially since it’s typically performed on a newly born infant. Unfortunately, the prostate can be damaged during the surgery since part of the procedure is performed near the prostate.

Any surgery, whether minor or major, is typically accompanied by adverse effects. If the side effects affect your sexual functioning, that can give rise to another set of problems like psychological distress.

That’s especially true if the surgery involves your reproductive organs. You’ll most likely feel anxious about how your sexual function and your fertility will be affected. If you’ve got one of your balls removed, you may become worried about the lop-sided appearance of your scrotum. Or, your reduced sex drive can cause problems in your relationship.

Discussing these issues with both your doctor and your partner may be able to help you handle your sexual problems better. And your doctor can guide you in managing your sexual dysfunction after your surgery.

You should also consider taking male sex enhancement supplements to help improve your sexual function. For instance, you can try all-natural ones which are known as effective and safe to use.

Plus, it is made with herbal ingredients that are proven to be safe and effective for treating erectile dysfunction like maca, tongkat ali, and Tribulus terrestris. If you’re looking for a natural way to manage your sexual problems, these supplements can definitely help.

So basically, we can’t really prevent the adverse effects of prostate surgery then. Thanks for talking about supplementation option to at least counter the effects on sexual functions.