As you throw back a cold beer with the boys or end a long day at work with a chilled glass of wine, you may not be thinking about how alcohol affects your health as you unwind. Consuming alcohol has become as an important aspect of our socialization, from being a symbol of your rights of passage into adulthood, an expression of maturity and is widely used as an important aspect of our recreational time.

Although the culture of alcohol has become solely linked to our society, researchers have spent years examining the effects of alcohol on the body’s health. Researchers examined alcohol’s effect on the body in all different avenues especially in regards one’s weight and weight gain. Most of the research conducted in this field was created to explore the main question: What is the correlation between alcohol consumption, weight gain and increasing one’s risk of developing obesity?

This research question can be answered looking at a few aspects of drinking alcohol.

Alcoholic beverages rank quite in regard to their calorie quantity. A glass of 12% wine contains approximately 126 calories, 17.5% fortified wine 65 calories and a pint of 5% strength beer 215 calories. If you enjoy alcoholic beverages and have implemented them into your diet, you could be consuming a hefty amount of calories each year. According to the National Health Service, drinking 5 pints of beer a week can add up to consumer approximately 44,200 calories a year which is the equivalent of eating 221 doughnuts.

The amount of calories consumed in your daily diet plays a vital role in weight gain. The number of calories that you consume is directly equivalent to the amount of energy it produces for the body. The body uses this energy to support its functioning and stores the remaining energy with fat cells as a reserve. Consuming a diet that is high in calories can cause you to gain weight especially in your energy intake is not equally balanced with how much energy you spend or burn each day. Therefore, consuming alcohol increases your calorie intake and in return increases your chances of ginning weight and developing obesity. 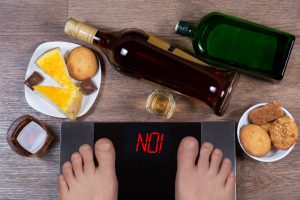 According to a research study published by the Health Economics, consuming alcohol results in greater weight gain for men than for women. The research study found that the number of days within in year that a person drank and the number of drinks they had during each episode correlated with significantly higher risks of weight gain and developing obesity. Additionally, researchers found that younger men are at a greater risk of gaining weight as a result of alcohol consumption while older men reported a significantly reduced risk of gaining weight. While another research complements the findings of this research as results reported that there was a 70% higher risk of participants who drank heavily in comparison to participants who drink infrequently. Participants who drank heavily received about more than 75% of their daily energy intake from alcohol itself.

Drinking alcohol also has a huge impact on your appetite. The Physiology & Behavior journal published an article that examined the effect of alcohol on your appetite. To conduct this research 12 male participants were observed over the course of the day after being administered three meals and a beverage 30 minutes before lunch, which was a randomized alcoholic beverage or non-alcoholic beverage. Participants who received an alcoholic beverage, which contained 4 units of alcohol, ate more foods high in fat in comparison to other participants who received other beverages. However, although these men ate more food, they reported feeling less satisfied after their meal.

A similar study published by the Journal of Physiology & Behavior as well reported results that complemented the data found above. This research was slightly different from the research study above as they had 26 males participants and where given a randomized non-alcoholic or alcoholic beverage, which contained 3 units of alcohol. Research from this study, however, highlighted that total energy intake was increased by 30% after drinking the alcoholic beverage which concluded that alcohol only increases your appetite for a short period of time.

Although research shows that consuming alcohol has a direct correlation between gaining weight and even increasing your risk of developing obesity, researchers were not able to pinpoint what causes this correlation. According to a research study published by the Journal of Clinical Endocrinology, the increase of your diet may be as a result of leptin levels in the blood. This study was conducted amongst 14 healthy participants who were given alcohol or water over the course of a day and specific intervals. The researchers then tested the participants in regard to their leptin and glucose levels.

The research reported a significant decrease in the body’s leptin levels after consuming alcohol than when participants drank water. This shows that alcohol inhibits the secretion of leptin within the body and is a possible answer as to why drinking alcohol opens your appetite. Leptin is a key hormone used by the body to regulate your appetite, food intake and consequently your weight. A decrease in leptin within the body results in a having a larger appetite. 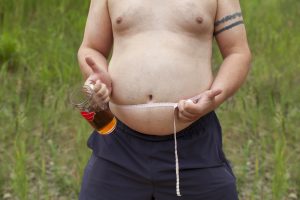 The way in which your body distributes weight is in part determined by your alcohol intake. A published research study shows that in addition to healthy eating habits and exercise, alcohol consumption was one of the main determinants of fat distribution between both sexes. People who drink alcohol regularly begin to see weight gain in their abdominal area after consistent use, which is a first indication of being at risk of developing obesity.

So, to simply answer your question, drinking alcohol causes you to gain weight. In addition to re-configuring the number of carbohydrates, protein, and fat within your diet, is it also essential for you to evaluate your alcohol consumption and the effect it can have on your weight loss journey and fitness goals. Although drinking a cold beer or a nice glass of wine can be quite therapeutic, trading your alcoholic beverage for another drink with a less concentration of alcohol or a therapeutic activity can help you to achieve your weight loss goals.

Together with red and white bakers twine