We’d all like to think we’re good eaters, but for some of us, this could be the farthest thing from the truth. Several of us spend our free time researching different diets, spending hundreds of dollars on books with titles like ‘The Foods That Changed My Life’ and diet plans we heard from a celebrity, who swear their lives that the diet will work. However, contrary to popular belief people do not have to be on a diet in order to eat healthily.

Eating healthy is actually something that should be able to be done very easy, all you have to do is eat healthy foods. However, as most of the people reading this likely already know, eating healthy foods is actually easier said than done. Foods proclaimed as healthy, such as a salad and vegetable soup, are usually way more expensive than foods proclaimed as unhealthy. You can get an entire meal from McDonald’s for less than five dollars, but something like a veggie burger can cost you double.

Nevertheless, here are a couple foods that are sure to benefit you that you should likely try integrating into your diet plans. 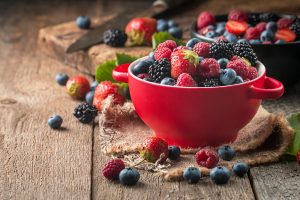 Fruits and berries are known to have unique and incredible tastes, which means it’s no shocker that they are among the world’s most popular health foods. Fruits and berries are also very manageable and attainable because they require no preparation whatsoever. Eating fruits reduces the risks of several diseases, such as heart disease, high blood pressure, and multiple cancers. They are also extremely rich in beneficial minerals and vitamins which will help you feel energized, motivated, and healthy. They are rich with antioxidants and will even keep you feeling fulfilled.

Apples are perfect to snack on throughout the day. Unlike most fruits, avocados are rich in healthy fats instead of carbohydrates. They are likewise full of fiber, potassium, and vitamin C. Strawberries are extremely nutritious and rich in vitamin C, fiber, and manganese. To add to this, strawberries are also low in both carbs as well as calories.

Even though the opinion of people who are choosing to live a vegetarian and/or vegan lifestyle are respected and valid, it doesn’t discredit the value that meat provides to your body and can even be one of the most nutritious things to feed to your body. Lean beef is one of the best choices of protein imaginable. It is loaded with highly bioavailable iron. Chicken breast is an option which is low in fat and calories but is still extremely full of protein. Chicken breast is also an awesome source of numerous nutrients.

Seeds, Peanuts, and other nuts

Yes, seeds, peanuts, and multiple other forms of nuts are still extremely high in calories and fat. However, several studies have suggested that nuts can actually assist you during the weight loss process. These snacks contain a lot of nutrients that a lot of people don’t get enough of, such as potassium, dietary fiber, vitamin C, vitamin E, magnesium, and folate. Nuts are fulfilling, which means they’ll leave you feeling satisfied with your food choices and you won’t be left with an empty stomach.

Nuts, in general, require absolutely no preparation, which also means they’re great for when you don’t have time to cook something up. Chia seeds are one of the foods with the greatest amount of nutrients on the planet. Only one ounce contains 11 grams of fiber, including a large quantity of the recommended intake of magnesium, manganese, and calcium. Almonds are filled to the rim with Vitamin E, antioxidants, magnesium, and fiber. Studies have shown that they can help you to lose weight and has many metabolic health benefits.

It’s no surprise to any of us that vegetables are on the list for some of the healthiest foods. In fact, it’s one of the very first things we’re taught when we’re little. Vegetables are one of the world’s most concentrated sources of a vast variety of nutrients. Asparagus is one of the most popular vegetables, likely due to it being low in carbs and calories but full of vitamin K. Apart from having a great unique flavor, bell peppers are also a wonderful source of nutrients such as antioxidants, and vitamin C.

One of the most popular root vegetables is 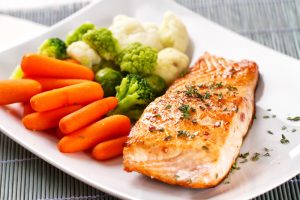 carrots, they’re loaded with nutrients such as vitamin K and are very high in carotene antioxidants, which are very beneficial. The flavor of an onion is very strong and harsh, meaning people usually either love them or hate them. However, that still does not discredit their value and how beneficial they are. Onions carry a very high number of bioactive compounds, which are believed by multiple nutritionists to have a large number of health benefits.

All seafood tends to be very nutritious and always a wise choice when it comes to healthy eating. Fish and other seafood have shown that they are loaded with iodine and omega-3 fatty acids, which are both very beneficial to the human body. Studies have even shown that those who adopt a diet with a lot of seafood involved tend to live longer than those who don’t. Those who eat seafood also have less of a risk for many diseases and illnesses, such as heart disease, depression, and dementia. Salmon is incredibly high in nutrition, protein, omega-3 fatty acids, and even some vitamin D. Sardines are also a part of the most nutritious foods in the world, considering each one carries mass amounts of nutrients that are essential to the human body.

Healthy eating can benefit people’s stress levels, sleeping habits, energy levels, and prevent life-threatening diseases such as cancer, heart attacks, strokes, and more. No matter how picky you are of an eater, how many dietary restrictions you have, or how limited your food options are, healthy eating should always be a priority.

HIGH-FAT MEALS VS HIGH PROTEIN MEALS; WHICH ONE...