HIGH-FAT MEALS VS HIGH PROTEIN MEALS; WHICH ONE IS BETTER FOR WEIGHT LOSS

The quest to lose weight has precipitated a lot of contentions. From dietary needs to workout sessions, people have always clamored to go for the best means ever towards achieving their fitness goal which in this case is specifically – weight loss.

Going further, in the battle on the most effective way to go about weight loss, the title of this article also comes to the fore. It has always remained a source of contestation among low carb dieters. However, whether high-fat meals are better for weight loss or high protein diets are more effective, this article will intend to reconcile the argument in line with proven scientific studies and basis.

Very briefly, it’s pertinent to consider what high-fat meals are and how it differs from high protein meals. 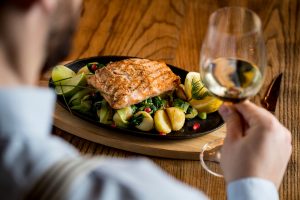 These are a meal that is rich in fat. A high-fat diet can also be called a ketone diet. It’s a diet that is high in fat but low in carbs. Suffice to say, the dangers inherent in the consumption of excess carbs informed the need to adjust to other types of diets – the ketone diet being one of such. Usually, the goal of a high-fat diet is targeted at weight loss.

A high-fat diet intends to substitute fats for carbs as a source of energy in the body. Glucose obtained from carbohydrates usually formed the basic source of the body’s energy to the brain and other parts of the body. But, excessive consumption of carbs poses serious health implications for the body as excess carbs can be stored as lipid cells consequently culminating in obesity. Also, insulin level begins to drop and this signals the inception of diabetes, a chronic life terminating illness. In other to avoid excessive consumption, a high-fat diet replaces glucose with ketones which are processed from monosaturated fats. The ketones produced becomes the body’s viable source of energy for the optimal performance of its functions.

Examples of the high-fat meal include omega 3 rich fatty fish like salmon, virgin olive oil, eggs, chia seeds, avocadoes, and so on. 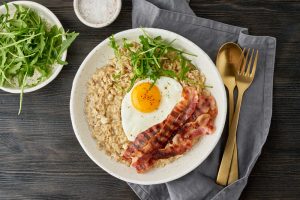 These categories of a meal are highly concentrated in proteins. Proteins are regarded as the body’s building block, hence, it is deemed as essential to the body. Food high in protein like the Paleo diets just like high-fat diets have been seen as beneficial for weight loss. Benefits of high protein meals are enormous, some of which include; muscle development and strength building; ease of achieving satiety during feeding; reduced appetite and hunger levels; stimulates metabolism as it increases the burning of fat by the body; it also reduces blood pressure; the list goes on and on.

NOW TO THE CONTENTION

A study by some Australian researchers revealed that both high-fat meals and high protein meals were effective for weight loss. According to the study, 57 obese men and women who were between the ages of 40 and 60 were selected as participants. All 57 participants were divided into two groups of low carb diet. The first group was fed with high-fat meals while the other group was fed with high protein meals. The high-fat group was exposed to the consumption of 45% fat calories, 37% carbs, and 18% protein while the high protein group consumed 34% protein calories, 37% carbs, and 29% fat.

The study found that at the end of sixteen weeks that the dieter in both groups lost about 10 % of their weight. The study also found that the high protein group felt less hunger than the other group and that there was a decrease in metabolism as dieting without exercising usually steps down the rate of metabolism.

At the end of the fifty-second (52) week, the study found that both groups have also lost up to 5% to 8% of fat. This was owing to a reduction in calorie intake.

Now, this study confirms that both a high-fat diet or high protein diet is effective for weight loss. Nevertheless, both can be criticized as being harmful to the body in the long run. By giving priority to fat, essential fruits, and vitamins which have been proven to be more effective for healthy living, in the long run, is sabotaged. This is also a major criticism of the high protein diet which is also criticized because it poses more health risks to the heart owing to exposure to meat and dairy products.

Together with red and white bakers twine