How to Stay Healthy During Flu Season

Flu season is upon us. The flu is easily one of the most suborn and hardest to destroy diseases in recorded human history. Although not deadly by any means, it has plagued the human race despite every effort to cure it. However, though we don’t have a means of eliminating it, we do have the means by which to deal with it, and to circumvent it when flu season comes around.

Society and health has come a long way since the old days, and we’re much healthier now than we’ve ever been before, and getting healthier. So while there’s already vaccinations you can receive to help strengthen your immune system against the flu, there are also other means that you likely do every day that keep you safe from the flu. So, for men over 25, here are some good basic steps to take to help you stay healthy during flu season

Get a good night’s sleep every night

You may not know this, but getting a full night’s sleep (that’s 8 hours, and no less) does more than help you wake up the next day feeling refreshed and ready to take on the day. A restful sleep actually strengthens your immune system. When you sleep, your body’s natural defenses have time to recharge, now that your brain is in rest mode and not on the lookout for any dangers.

Sleeping is your brain’s way of letting down its guard for a while so it can ready itself for the coming day. So when flu season arrives (and well before/after, in fact) make sure to get plenty of sleep so your immune system is prepared for the coming battle. 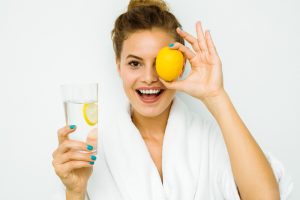 Increase your intake of natural water during flu season, even if you do get sick anyway. The flu is going to dehydrate you when it hits, and that will make you feel worse. Staying hydrated will keep your throat moist so swallowing food isn’t as much of a hassle, loosens up mucus so you can breathe easier, and prevents any further dehydration caused by the fever the flu gives you.

Normal water works fine, but warmer liquids are preferred. In fact, inhaling steam from a hot soup early on in your cold can actually reduce the spread of viruses in the upper area of your respiratory tract. This happens because the steam makes the cilia stand at attention and work overtime. The cilia’s job is to block out air borne pathogens from your respiratory tract.

C and E vitamins primarily help the human immune system when consumed. So when you get sick, or believe you are in danger of becoming sick, make sure to eat plenty of foods containing these vitamins. These include corn oil, sunflower seeds, and peanuts for vitamin E. And citrus fruits, orange juice, and broccoli for vitamin C. Also be sure to reduce your intake of sugar when you’re sick with the flu, especially concentrated sugar, such as those found in soda or candy. Sugar impairs the immune system’s response, and thus will hinder the progress made by these steps.

This is one of the most important steps you can take. You need to wash your hands during flu season. After you eat, after every bathroom trip etc. this is one of the most effective ways to keep yourself healthy during flu season. Flu viruses are spread in a human population via droplets launched from the infected nose when they sneeze. During a flu outbreak, make a note to keep your hands out of your mouth, away from your eyes, and to wash your hands several times a day, especially if you’re about to sit down for a meal. If you failed to do any of these steps during a flu outbreak, chances are that’s how you got sick.

If you already exercise on a regular basis, don’t let a flu outbreak slow you down. If anything, this helps you resist catching the flu. Not only does regular exercise lower your stress, but also it can also invigorate your immune system and even help you sleep better, now that you’ve worked out all of that tenseness. If you have someone in your life who’s getting a bit up in the years, encourage them to join you for an afternoon jog, as this does particular wonders for elderly immune systems that may not otherwise be as strong as a younger man’s.

Get your flu shot

You won’t have to worry about forgetting. We’ve gotten pretty good at predicting when a flu outbreak is imminent, and doctors will quickly get the word out when they have vaccinations ready. Flu shots don’t make it impossible to get the flu, but it does drastically lower your chances, more so than pretty much every other entry on this list. So when you hear that a flu outbreak may be incoming, talk to your doctor if you haven’t had your yearly flu shot yet, so you can be immunized. Now you can go about your daily life as normal, keeping your hands washed and your body flu free.

If you get worse, seek out help

There’s one last danger the flu poses to you. While the illness in itself isn’t deadly anymore, it does weaken your immune system something fierce, and thus can leave you vulnerable to much worse diseases, one of which being pneumonia. If after the first three days of being sick, your fever subsides, then comes back full force and even worse than before, see a doctor or hospital immediately. Chances are good that you are much sicker than you realize, and you should have a doctor look at you as soon as you can.

The flu is a nasty bug when left at its mercy. Thankfully, we haven’t been at its mercy in decades, and we’re only getting better at fighting it. So if it’s that time of year again, when everyone is sneezing and tissues are flying off the store shelves, remember these tips so you can stay healthy and safe from the flu.

How to Spice Up Your Sex Life After 25