Lyme disease is a pain in the rear end, to say the least. However, this summer season, Lyme disease is not the only thing that should get you worried.

Earlier in the year, health experts warned us that this year would be the worst thus far, in regards to tick bites. In fact, some said that we were about to face what they termed a “tick explosion,” making many American’s extremely wary of the matter.

Now, to go into even more detail on the matter, experts are stating that the Lone Star tick is one of the worst ticks that you should watch out for. Specifically speaking, Lone Star ticks can really change your life, in matters concerning your nutritional intake. In other words, this specific tick can really mess up the foods you put into your body. Unfortunately, the Lone Star tick actually produces allergies to certain foods. And, the one food that it can really stop you from eating is red meat. What’s worse is that this specific tick is growing in population size, and it’s migrating towards us at faster rates than ever before.

Typically, this tick sets up shop in the southeastern regions of the United States. However, in the past few years, the Lone Star tick has migrated to states such as Maine, New York, and Minnesota. Experts believe that the change in climate and weather has given these ticks the opportunity to move and get comfortable in certain locations throughout America.

Many scientists have predicted that the upcoming years will get worse. Due to the increase in temperatures, they predict that the ticks will move towards the northern and western regions rather quickly, causing more problems than ever before. 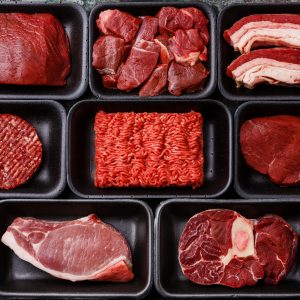 Now, back to the meat allergy portion of the article.

Allergist Dr. Scott Commins found approximately 10 years ago that this Lone Star tick can potentially cause severe meat allergies in some of its victims. When the discovery was made, only about a dozen people were affected by the situation. Now, however, things have changed, and people are being affected by this at alarming rates. Commins claims that approximately 5,000 cases exist today, and that’s only in the United States, never mind the rest of the world.

As of now, the Lone Star tick is the only species that conjures up such an allergy in us humans.

What you should know about such allergies

The process by which our bodies become allergic to red meat is a little complicated. It goes as follows:

When a tick latches onto a human’s skin, it releases a molecule known as alpha-gal. This molecule can potentially make some humans immune systems react so strongly to it that they are no longer able to eat red meat. What’s worse is that some people have such a bad reaction to the molecule that they develop a dairy allergy, too.

Unfortunately, as many people age and develop allergies to food, such allergies can spring on you almost immediately. This is not the case with the molecule alpha-gal. With alpha-gal, symptoms such as wheezing, hives, and abdominal pain don’t start to happen until approximately three to six hours after eating the food.

Though researchers are unsure why some people develop the allergy after coming into contact with a tick and others don’t, there is a blood test that can confirm the reason.

What to know about Lone Star ticks this summer season

Lone Star ticks come out of ‘hibernation’ between the months of March and September. This is why you should worry about them now, and not later. And, though the southeast is the most common area to get such a tick bite, there are other areas that are prone to having these nasty critters around. Such states are Minnesota, Maine, New Hampshire, and New York. As a matter of fact, there were approximately 100 victims last year that developed the meat allergy, and they were only located in Long Island, NY.

Fortunately, the Lone Star tick does not give its victims the dreadful Lyme disease. However, even though you are able to dodge the bullet with this disease, you are still apt to get other diseases that spread severe bacterial infections.

How to protect yourself this year

Now, I know you’re not going to like my suggestion here, but put on clothes. One of the only ways to stop those ticks from getting a hold of your skin is to wear shirts and pants that cover your body. And believe me, I know it may sound like torture, especially on those really hot and humid days.

So, if you’re not willing to cover up your body, please at least use insect repellant. Be sure to pick up one that has DEET or picaridin in it, as these ingredients will provide you with optimum protection. Spray it on your skin and on your clothes, just to be safe. And I know it may smell funny, but it beats being allergic to red meat for the rest of your life.

In addition, do what every person tells you to do after coming in from outside: inspect your body to be sure there are no ticks hanging onto your skin. If there are, follow suggested procedures as to how to get them off and kill them the best way.