You are what you eat! I’m quite sure you’d have come across this aphorism at some points. It reflects the importance of whatever goes into your buccal cavity. It’s that exquisite. What goes into your mouth has a lot to do with your body mass index (BMI). Now, for you to lose weight effectively, you have to run away from these foods.

The New England Journal of Medicine study affirmed that red meat contains a lot of fat and as such will not help you to lose weight. Buttressing this is the China Health and Nutrition Survey of over 16,000 participants which showed that what distinguishes between meat that causes abdominal weight gain and meat that keeps your metabolism moving is how visibly fatty the cut is. So, when you’re trying to lose weight, avoid those fatty ground beef blends of 70% lean 30% fat. 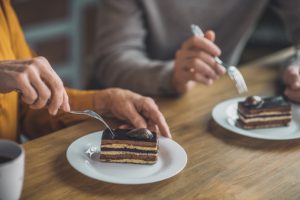 Sodium is a big culprit here, not to mention the sugar…and calories…and fat…and everything else. These sweet treats are often oversized and come at the end of a decadent dinner out already, so they can add on almost a thousand extra calories (or more!) to an already over-the-top meal. Eating out at restaurants can be viewed as a treat, and if it’s the dessert you’re really there for (say, the place is known for their 7-layer chocolate cake), a better way to balance your meal is to pick your dessert first. A new study found that choosing your dessert first can help you eat fewer calories overall! To balance the meal, adjust your main meal to be healthier (opting for grilled fish instead of fried fish, for example, or choosing a side salad instead of French fries), and then share the dessert you want with a partner.

Okay, so you probably already know that potato chips are fattening and can often hide dangerous levels of sodium, but what’s surprising is that out of all the foods that can cause you to gain weight—soda, junk food, ice cream—the potato chip is the worst offender. According to a Harvard study published in The New England Journal of Medicine, potato chips are the food most strongly associated with weight gain over four years.

Relax, we’re not telling you can’t enjoy the occasional glass of wine or beer, but it’s no secret that overdoing it on the booze can dampen your weight-loss goals and pose risks to your health. Consuming alcohol has been shown to trick your body into eating more, too. In fact, the University of Liverpool found that as few as two drinks can significantly increase the amount of food we consume because it alters our perception of food and enhances how delicious they seem. Another report in the Journal of the Academy of Nutrition and Dietetics found that drinking alcohol can cause people to eat an extra 384 calories a day. So if you want to imbibe, be sure to take sips of water in between alcoholic drinks and try to avoid sugary cocktails.

Sweet squares and fruity puffs do nothing to keep you healthy or shrink your waist, and many kinds of cereal pack more calorie-dense sugar into one bowl than you’ll find in a Boston Kreme Donut! Switch to something more filling if you want to lose weight, like overnight oats. According to a study in the Annals of Nutrition and Metabolism, having oatmeal for breakfast results in greater fullness, less hunger, and fewer calories eaten at lunch compared to a serving of corn flakes, even though the calories for the two breakfasts are the same.

The second food Harvard researchers found to cause the most weight gain? Potatoes. And more specifically, french fries, which were associated with an additional 3.35 pounds of weight gain. According to Walter C. Willett, chair of the Department of Nutrition at the Harvard School of Public Health and author of Eat, Drink, and Be Healthy: The Harvard Medical School Guide to Healthy Eating, “the venerable baked potato increases levels of blood sugar and insulin more quickly and to higher levels than an equal amount of calories from pure table sugar.” Patrick J. Skerrett, co-author of the book and former editor of the Harvard Health Blog, adds, “french fries do the same thing, but with an added blast of fat.”. 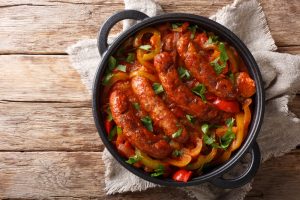 Eating bacon, sausage, and hot dogs may be putting your life at risk. The same Harvard researchers associated processed meat consumption with an additional 0.93 pounds of weight gain over 4 years. Weight gain isn’t the only reason you should cut back on your processed meat consumption. The food has also been associated with an increased risk of diabetes, cancer, and hypertension.